At No. 21, Universal Music achieves the highest rank ever for a major music company and becomes the first selected for the list’s elite Top 25 most innovative companies

UMG also ranked No. 1 in the music category

SANTA MONICA, Feb. 20, 2019 — Universal Music Group (UMG), the world leader in music-based entertainment, has been named to Fast Company’s exclusive annual list of the World’s 50 Most Innovative Companies for 2019, the first major music company to be included on the list in a decade. 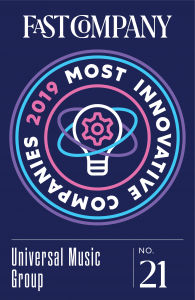 At No. 21, UMG is the highest-ranking major music company ever chosen for Fast Company’s list and the first to be selected in the elite Top 25 most innovative companies. UMG is also ranked No. 1 in the music category. The list honors businesses making the most profound impact on industry and culture, showcasing a variety of ways to thrive in today’s volatile world.

Fast Company pointed to the success of UMG’s artist roster, the global reach of its labels and new agreements with leaders in tech and entertainment: “Amid the music industry’s digital transformation, Universal is redefining what a modern label should look like.”

Fast Company added, Universal Music Group “has played an active role in leading the music industry through a period of unprecedented digital transformation.”

This year, Fast Company’s editors and writers sought out groundbreaking businesses across 35 industries and every region. They also judged nominations received through their application process. The World’s Most Innovative Companies is Fast Company’s signature franchise and one of its most highly anticipated editorial efforts of the year. It provides both a snapshot and a road map for the future of innovation across the most dynamic sectors of the economy.

About Universal Music Group
Universal Music Group (UMG) is the world leader in music-based entertainment, with a broad array of businesses engaged in recorded music, music publishing, merchandising and audiovisual content in more than 60 countries. Featuring the most comprehensive catalog of recordings and songs across every musical genre, UMG identifies and develops artists and produces and distributes the most critically acclaimed and commercially successful music in the world. Committed to artistry, innovation and entrepreneurship, UMG fosters the development of services, platforms and business models in order to broaden artistic and commercial opportunities for our artists and create new experiences for fans. Universal Music Group is a Vivendi company. Find out more at: http://www.universalmusic.com.

About Fast Company
Fast Company is the only media brand fully dedicated to the vital intersection of business, innovation, and design, engaging the most influential leaders, companies and thinkers on the future of business. Since 2011, Fast Company has received some of the most prestigious editorial and design accolades, including the American Society of Magazine Editors (ASME) National Magazine Award for “Magazine Of The Year,” Adweek’s Hot List for “Hottest Business Publication,” and six gold medals and 10 silver medals from the Society of Publication Designers. The editor-in-chief is Stephanie Mehta and the publisher is Amanda Smith. Headquartered in New York City, Fast Company is published by Mansueto Ventures LLC, along with our sister publication Inc., and can be found online at www.fastcompany.com.