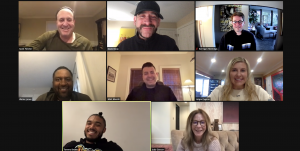 The co-creator of numerous chart-toppers, Brown worked with Ariana Grande on all six of her studio albums including executive producing the most recent album ‘Positions’ which went to No. 1 and features Billboard 100 No. 1 song “Positions” and hit “34+35” which peaked at No. 2. Brown also co-produced global hits “Holy” by Justin Bieber ft. Chance the Rapper, “Ice Cream” by BLACKPINK ft. Selena Gomez, “thank u, next,” “7 rings” and “Boyfriend” by Ariana Grande, “Make Believe” by Juice WLRD, “Candy” by Machine Gun Kelly ft. Trippie Redd, “Dinero” by Jennifer Lopez ft. DJ Khaled and Cardi B, “Rich” by Megan Thee Stallion, produced several songs on Meghan Trainor’s second album ‘Thank You’ and more.

Jody Gerson, Chairman and CEO of UMPG, said: “Tommy is the real deal. He is a top-notch songwriter and producer, and he is one of the best early identifiers of talent. I’m thrilled to welcome him to UMPG and look forward to having loads of success together.”

Brown said: “Thank you Jody Gerson, David Gray and UMPG. I’ve always had great long-term business with Universal and I’m happy to be joining the publishing family. UMPG is a first-class support system for creatives and I look forward to making history together.”

Over the course of his career, Brown has worked with some of the biggest names in music including Ariana Grande, Jennifer Lopez, Travis Scott, John Legend, Blackpink, Chris Brown, and Fifth Harmony, among others.

David Gray, Co-Head A&R at UMPG, said: “I’ve known Tommy for years now and I am so impressed with the talented, creative producer he is today. I want to thank Jody and our UMPG team for their support. This is the beginning of what will undoubtedly be a successful and thriving partnership.”

The agreement builds upon Brown’s relationship with Universal Music Group, who he partnered with in 2019 to launch Champagne Therapy Music Group.