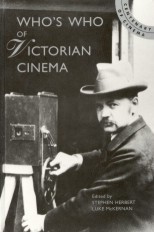 'The movies' arrived in 1895 and had reached almost every corner of the globe by the end of 1896. At the close of the nineteenth century 'the cinema' was firmly established as a medium of entertainment, instruction and experiment, making fortunes and reputations and changing the way that people looked on their world.

This book records the lives of the people who made this happen. Not only the inventors and the first film-makers, but also the subjects of those first films (actors, sportsmen, politicians); and the opportunists, eccentrics, propagandists and crooks who adopted the new medium with enthusiasm.

From Thomas Edison, inventor, to Eugène Pirou, pornographer; and from Alice Guy, director, to James Corbett, boxer - over 250 key figures worldwide are entertainingly documented in an authoritative reference work.

'... superb ... a treasure trove of information for the more serious film buff ... a triumph'.

'... it will undoubtedly become the standard reference work and a valuable guide for future researchers'.

'... this impressive and valuable book'.

'... can be used as a reference book or read for pleasure'.